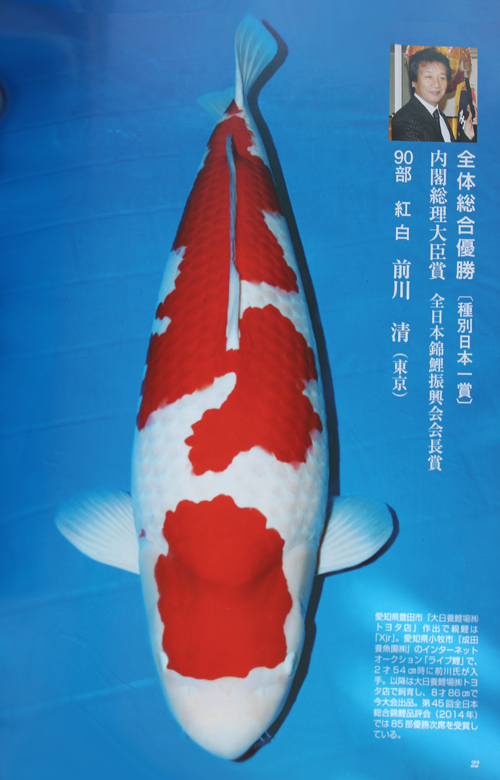 Kiyoshi Maekawa was born in Sasebo, Nagasaki in 1948. In 1969, he joined “Hiroshi Uchiyamada and Cool Five” as the lead vocalist, and made a debut with Nagasaki wa Kyou mo Ame datta, appearing on The 20th NHK Kohaku Uta Gassen; NHK Red and White Song Battle for the first time. Producing numerous hit singles including Uwasa no Onna (1970), Soshite, Kobe (1972), Nakanoshima Blues (1975), Tokyo Sabaku (1976), Kiyoshi has performed on NHK Kohaku Uta Gassen 29 times in total as a solo singer and as Cool Five, making him one of the most influential singers in Japan. On top of his successful career as a singer, he started breeding Nishikigoi fish as a hobby decades ago. Now he owns several koi farms across the country, including Ojiya, Niigata prefecture. Picked carefully by Kiyoshi Maekawa himself, his Nishikigoi “Maekawa Kohaku” have been shipped to customers all over Japan. Awarded as Grand Champion for The 45th National Nishikigoi Show hosted by All Japan Rinyuukai in November 2014, his Nishikigoi “Maekawa Kohaku” also attracts fans internationally, mostly from China and other parts of Asia, Europe and United States.

“Maekawa Kohaku” Nishikigoi is bred in Ojiya, Niigata prefecture. Ojiya city is known as the birthplace of Nishikigoi and has been the center of the Nishikigoi fan’s attention since early nineteenth century locally and globally.

The first Nishikigoi was born by genetic mutation by accident. In the beautiful nature of Niigata with the cleanest water from the snowy mountains, people in Ojiya have spent years and years on the research and improvement of Nishikigoi, which came to be known as a “swimming jewel” today epitomizing the beauty of ornamental fish. “Maekawa Kohaku” is grown fastidiously in the very Ojiya city by Kiyoshi Maekawa himself and local koi farmers.

Maekawa Kiyoshi believes in quality, and limits the “Maekawa Kohaku” sales only to selected channels, which enables him to breed his fish with extra care. He hopes to provide quality, affordable Nishikigoi to everyone from longtime fans to first timers.

In 2019, Maekawa Kiyoshi was officially inaugurated as Tourism Ambassador for Ojiya city and has been actively spreading the charm of Ojiya and its Nishikigoi across the country.